It must surprise you how we’re coming up with all these New-Name brand devices.

Yes, Bitfinic is pretty new, but we found out it’s a sister brand to Taotronics. Remember we already reviewed some Taotronics massage guns, and they turned out to be decent budget devices.

This Bitfinic mini is not just new; it’s affordable as well. We bought it, tested it, and now let’s see how it performs.

Unlike the Taotronics (they looked pretty classic – T-shaped and all), this one looks a little different – somewhat familiar, but definitely different. It’s similar to Theragun mini.

You’d probably call this one more circular than the somewhat triangular Theragun mini, but the concept is very similar. It’s also about the same size as the Theragun mini.

We love the stylish approach they took here. The whole device is satin and plastic everywhere. The look and feel is quite nice. It also feels reasonably durable and sturdy – it’s definitely not a toy.

We like the quality of this massage gun. The concept is rather fascinating for a budget device. We love the color choice and the design concept in general. It is all-plastic though, and thus feels cheap comparing to rubberized Theragun. But it is three times less expensive, so we’ll take it.

What Else is Included?

It’s a mini gun so you can expect it to be compact and highly portable.

However, don’t expect it to be as tiny as the Bantam, Recoverfun Mini, or even Bob and Brad’s Q2. It measures 5.9 x 5.4 x 1.9 inches. The shape affects the size perception (the same thing as Theragun Mini).

We noticed something else that we haven’t seen with most mini guns: huge attachments, at least from a mini gun perspective. These are regular-sized gun attachments.

This makes the guns look bulky for its category. However, it’s probably not a very bad thing. These attachments can fit on the larger Taotronics (and perhaps on many other third-party guns).

The gun itself weighs 469 grams or 1.03 pounds with the flat attachment mounted. That’s pretty light. For its size, we hoped it would be between 1.3-1.5 pounds at least. We were wrong. This one is very light – how awesome!

Expect a Theragun mini-like device. However, there’s a twist that we hoped Theragun would’ve employed for their gun. There’s a handle.

This is not just fascinating but pretty awesome as well. You can hold it in two ways; grip the outside of the handle or put your hand in the space and grip the device instead. You can use the former grip to massage most of your body, while the latter hold can help you massage the hard-to-reach parts.

Unfortunately, as we said before, the body isn’t rubberized. Expect sweaty hands during longer sessions.

We would’ve hoped for some rubber on the handle or near it to make the grip even better. However, for the price, we won’t complain.

This is a fascinating approach and a bold one at that. It’s probably not as new since Theragun already did it, but we like the innovativeness. The execution is okay, even though it makes the device slightly bigger to be a true mini.

There are 4 attachments included. These ones can fit on larger guns as well. The mechanism used to insert is basic push-n-pull. The attachments are well-varied and similar to the ones on the Taotronics devices.

Overall this is a good set of attachments for a mini device this cheap.

The controls are simple; just a one-button operation setup.

You turn the device on by pressing it for about two seconds.

The button also works to change speeds – tap it to move to the next speed.

So, how well does this device perform?

Also called the Stroke Length, it’s the distance the massage gun head travels as it percusses. It determines how deep a massage you get.

Here Bitfinic says it’s 10mm. We always like to measure just to be sure, and we can confirm that it’s indeed 10mm.

10mm is on par with most mini massage guns (the good ones). For instance, Ekrin Bantam and even Hypervolt Go 2 have the same. Only Theragun mini has more – 12mm.

10mm is enough for a percussive massage if you have enough stall force. The motor has to be strong enough to keep the device going even under pressure.

But is this gun good enough when under pressure?

It’s the amount of force a device’s motor can withstand without stalling or shutting off.

We love that Bitfinic has the stall force info listed in their product specs. They say it is 22lbs. We saw that and couldn’t hide our excitement. On paper, that’s pretty good for this kind of device.

But is it really that strong?

Well, unfortunately, it isn’t. The stall force here is disappointing. It’s probably the weakest feature of this device.

We don’t believe it’s the 22lbs. advertised. Instead, it’s probably about 10-15lbs. Even the weak Hypervolt Go 2 felt slightly stronger.

It would be disrespectful to compare it with Ekrin Bantam, which has over 30lbs.

Even worse, it doesn’t really matter what speed setting you’re on; it stalls easily at just about any intensity. This isn’t what we are used to. Usually, devices tend to be stronger at the highest speed setting.

Also, when it stalls, it doesn’t resume immediately as the pressure is eased. The motor resuscitates for about 3 seconds but then shuts off completely. You have to restart the device again at this point – what a bummer!

It has a wide percussion range. That and a decent amplitude make it an okay proposition even though the stall force is bad. The advertised range is 1400-2560RPM. Our laser tachometer seems to agree.

This is not a bad range, but we are wondering whether they couldn’t do more.

Compared to Ekrin Bantam’s 3200RPM, this feels a little short.

It has four speeds to go with the percussions – enough for the range.

To wrap up the Performance

If only we had a specs line of 10mm amplitude, 22lbs. of stall force, and a wide percussion range, this would’ve been a versatile device – good enough for an intensive massage.

But, even though we won’t complain about the intensity, the stall force isn’t good enough.

Beginners will still like what it offers (massaging tight muscles and helping with pain with surface vibrations and little pressure applied).

Perhaps that’s why it’s priced so low – the Bantam is 3x the price of this one. This isn’t it if you are looking for more stall force from a mini device!

Mini devices tend to rev quietly. Fortunately, this one follows the same norm. It has acceptable noise levels.

Also, the sound is smooth. There is some rattling at higher speeds though, which probably adds to the decibels.

Overall we’d say it’s decent. It is not the quietest device out there, but you get what you pay for!

The size of the battery is 2600mAh. That is the similar capacity of most full-sized guns out there. Maybe that accounts for the bulky profile?

Even so, it’s slightly surprising that they still kept the device’s overall weight pretty low.

Unless they shrank the motor to accommodate the battery – that’s probably why the motor’s weak, right? Has to be!

That said, the battery will last 3 to 10 hours, according to Bitfinic. That is possible given the capacity and the weak motor.

Realistically, it should last about half the time if you use higher speeds and apply more pressure. That’s still excellent; you can use it for 7 to 10 days before charging it again.

The battery has 4 LED indicators under the control button that indicate the charge status.

They all flash when the battery is charging. They turn a solid white when it’s fully charged.

The biggest plus is the USB-C charging. A regular USB cable is included to make charging convenient.

The price is awesome. Just $59.99 when purchased from their store.

Taotronics offers discounts, and you can expect one for this device. If you check the top section of their site here, you may see a link to discount coupons – so it can be bought even cheaper.

If you want a different proposition but are willing to pay more, Ekrin Bantam is the perfect alternative. It’s one of the best mini massage guns.

It’s much smaller, even tinnier. It has a traditional shape but with an angled handle.

The handle is rubberized, and the angled approach gives about an inch more reach when you are trying to massage your lower back.

It weighs about the same as the Bitfinic – 1.1 pounds.

The Bantam has an excellent build (the quality of materials feels premium). It performs even better compared to Bitfinic. It has a 10mm amplitude

but a far more powerful motor that can withstand up to 35lbs. of pressure. This makes it one of the strongest minis out there. If you need a stronger massage, you just found your device.

It’s quieter, well equipped (a case and 4 attachments of better quality than Bitfinic). It also comes with a lifetime warranty.

Almost twice more expensive but totally worth it!

This one is T-shaped and slightly larger than Bitfinic, but it has something that Bitfinic doesn’t.

It has a 9mm amplitude, which is 1mm shy but a better stall force.

It’s also made of better materials, and there’s plenty of rubber on the handle.

It’s also quieter, has more attachments (6, nicely varied), and has a carrying case.

The big plus is it’s even cheaper:

That is our Bitfinic massage gun review. We like the interesting concept used to make it. The design is okay and the materials used are good enough.

However, Bitfinic gave it a good amplitude but just couldn’t back it up with a better stall force.

Otherwise, this is an affordable massage gun for beginners, those who need a complimentary device, and if you prefer delicate hits rather than a deep massage.

Get your Bitfinic right here, try it, and tell us what you think (drop us a comment below).

The Bitfinic mini massage gun has a unique shape, a nice amplitude, and good enough intensity. However, it lacks greatly with its weak stall force. For the price, it’s a good choice for beginners and those who prefer more delicate, shallow hits. 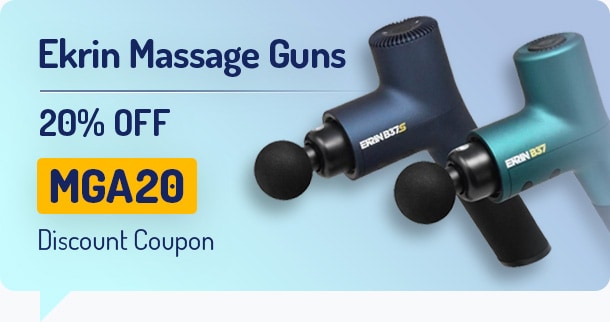 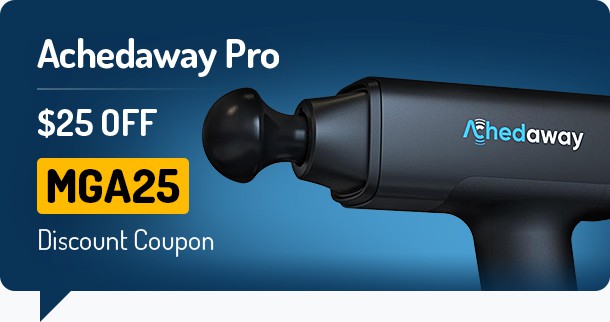